Beer, bread and Marmite are three of life’s essentials that derive from fungi. Their ecological importance is even greater.  The range of forms, shapes, colours and life history of the 15,000 or so Fungi in the UK is endlessly fascinating.

Species in this diverse Kingdom provide an essential function as decomposers. Without them the forest floor would be littered with persistent dead wood. Many plant species, including most trees, rely on mycorrhizal fungi for their nutrition. But fungi are also important plant pathogens. Dutch Elm Disease and Ash Dieback are perhaps the most well-known but many a gardener will have been worried at the sudden appearance of the fruiting bodies of Honey Fungus.They bring the likelihood of significant losses of trees and shrubs as their hyphae infect and cause a white rot in roots and stems.

It’s the fruiting bodies of fungi, Mushrooms and Toadstools to many of us, that provide the public face of fungi. There is no consistent definitions of these terms and no rules that say whether a fruiting body should be called a Mushroom or a Toadstool. Many fungi such as Field Mushrooms and Chanterelles are deliciously edible. Many are deadly poisonous – Death Cap, Funeral Bell and Destroying Angel bear a warning in their common names. These larger fungi are mostly in the Basidiomycota and there is a parallel division of mostly smaller species, the Ascomycota, which are often called Cup or Sac-fungi. 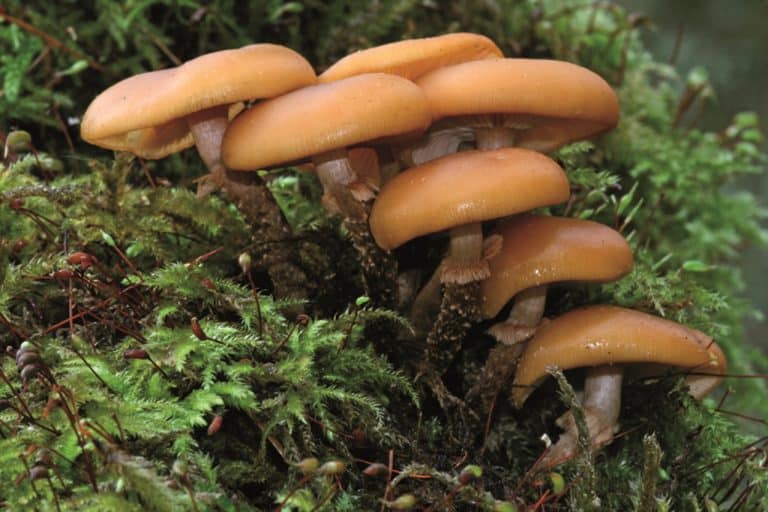 FSC run regular Fungi Courses throughout throughout the year. For details of these courses, and to learn more about fungi view our courses click the link above. Good tutors and a detailed knowledge of suitable locations have bought this amazing group of organisms alive and started life long interests in many people.

The FSC Fungi Identification Chart is designed for speedy identification of the main groups of fungi (mushrooms, toadstools) found in gardens, grassy places and woodlands.